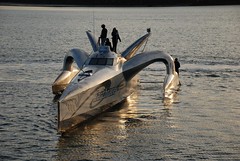 I started listening to omega tau, a relatively new podcast from one of the guys at Software Engineering Radio. One of the earlier episodes is an interview with Pete Bethune of Earthrace, who recently broke the world time record for circumnavigation of the world in a powerboat. It's a fascinating interview and worth a listen.

After breaking the world record, the crew took Earthrace around the world to visit lots of places where they obviously couldn't stop during the record run, to let people visit and have a look around the boat. Pete Bethune is from New Zealand, so the final tour was a trip around New Zealand, with stops at dozens of coastal towns around the country, large and small.

Two months ago, Earthrace stopped in Lyttelton and Akaroa, both short drives from Christchurch. Somehow, I had totally missed this news but would really have liked to see the boat. So, I'm a bit disappointed about that. If only I had listened to that podcast earlier! Pete is now selling the boat (for US$1.5 million) so it appears the opportunity has been missed.