Grr, I just wrote a week's worth of summary text then accidentally hit Reload which threw it all away. LJ's auto-save certainly didn't do whatever it was supposed to do. I'll try again. Stupid browser.

I left off in Ireland. (This Icelandic keyboard is crazy, I'll take a picture.)

24 March - Drove out to Mizen Head, which is the most southwesterly point in Ireland. There is a lighthouse there which is now all automated, but there are exhibits and lots of historical info about the history of the light. It was WINDY!

25 March - We took it easy because Amy got a cough and wasn't feeling well (which later turned out to be an ear infection). Went for a short walk, as well as a drive up Mt. Gabriel (near Schull). Again it was seriously windy at the top.

26 March - Returned to Coachford in time to catch a production of the new musical "Michael Collins" in Cork. It was about the life of Michael Collins who negotiated the first steps toward a free Ireland in the early 1920s. Very patriotic. It was well produced and apparently well received by the audience. The theatre where we saw it actually had particular relevance in the real-life events portrayed in the musical, which was cool.

27 March - Went into Cork and explored the town a bit.

28 March - Travel day. Flew from Cork to London (Gatwick) on Ryanair, where they nickel and dime you to death after advertising a €5 fare which ended up costing us almost €100 for both of us. Still not a bad price, but annoying. Saw very little of London except the train from Gatwick (what you save on Ryanair you pay in the £36 train fare) and the tube. Had a pretty good Indian meal on Brick Lane (aka. "Little India").

29 March - Travel day again. Flew to Reykjavik, picked up our rental car (a 4WD diesel Škoda Octavia, which turned out to be a great choice), drove into town, and wandered around town a bit. Despite all the people who said, "You're going to Iceland? You realise the country is bankrupt, right?" the country seems to be continuing to function just fine.

30 March - Drove out to Þingvellir, the site of the first political centre in Iceland a thousand years or so ago. It's also a great place to see tectonic plates in action - the North American and European plates are moving apart and the rift valley is abruptly visible there. Very windy and cold. Returned to Reykjavik to navigate the health system (good thing most people here can speak English) so Amy could get some antibiotics.

31 March - Again from Reykjavik, saw Geysir and Gullfoss and a few other things I have pictures of. Drove to Vik in clear weather except for the last few kilometres where a snowstorm obscured the car in front of us, only perhaps 20 m away. Managed to locate accommodation in Vik, had a four course "hotel room" meal consisting of mushroom soup, cheese sandwiches, fish, and hot chocolate using only a small electric kettle and two coffee cups!

1 April - Drove back west to a glacier (which I can't find the name of at the moment) for a glacier walk with a guide. We hiked a couple hundred metres (in altitude) up a glacier and our French guide was full of interesting information. Windy and rainy but it didn't detract from the day at all. Drove eastward again past Vik to a hostel for the night.

2 April - Since we're heading all the way around the Ring Road and sort of got a slow start, we pushed all the way ahead to Egilsstaðir. We passed an incredibly huge glacer that was some 20 km wide at its tongue. Saw lots of smaller glaciers, many waterfalls, and all kinds of scenery. If you're following along on a map, where the ring road turns inland just before Egilsstaðir, it goes over a small pass that is only about 400 m in altitude, but was seriously snowy. The snowplows keep the road passable, but we sure were glad we have a 4WD vehicle with studded winter tyres.

Tomorrow we will continue along the northern side of the island, where we want to spend more time and where the weather forecast should be better. Although the snow, wind, and rain we've had so far has not been a problem, it would be nice to be able to see more of the mountains too.

Some pictures from Iceland. 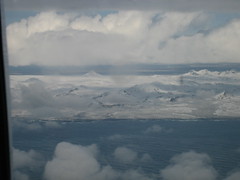 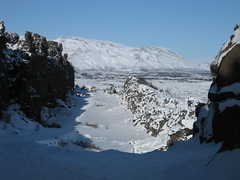 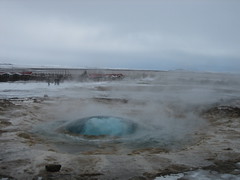 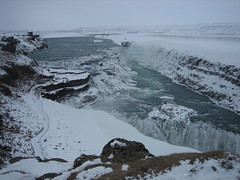 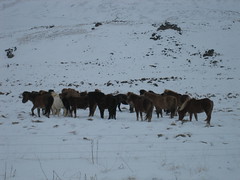 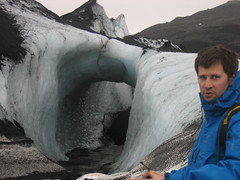