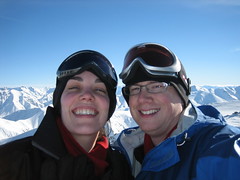 We finally got a chance to go skiing! Ski season here opened about three weeks ago, but I got some kind of cold that knocked me out for about two and a half weeks. Over the past few weeks, there has been significant early season storms here that provided a good solid 130 cm base at Mt. Hutt. Last year, which was abysmal, the maximum base was something like 36 cm.

We booked a ski bus which picked us up at 6:50 am half a block outside from our front door. By 9:45 we were at the bottom of the lifts. After a good solid day of skiing, we were back at home by 6:30 in the evening. I have not yet had the good fortune to live close enough to a ski hill to effectively do skiing day trips. This is absolutely fantastic. No longer does skiing involve at the least a nine hour round trip on a bus, nor at the most an airplane flight and booked accomodation. All we have to do is let the bus know we're going the day before so they can pick us up, and we can be back in plenty of time for dinner. Four hours total on the bus is quite tolerable.

Mt. Hutt is one of the largest ski areas on the South Island, but it's still quite a bit smaller than what I'm used to. The last couple of times I've been skiing have been at "mega-mountains" where there is pretty much an entire town at the bottom. For example, Copper Mountain in Colorado has dozens of restaurants and thousands of hotel rooms within a snowball's distance of the lifts. Mt. Hutt has one cafeteria and no accomodation. Another difference was the complete lack of trees. I'm used to ski runs winding in and out of treed areas, but Hutt is completely above the treeline so it's completely wide open. Runs are named (on the map) but not actually marked, so you never know what you're skiing on. There are three chairlifts plus a bunny hill, and there is plenty of varied terrain.

New Zealand is great. Not only is there an amazing view from the top of Mt. Hutt, but I can actually see the glider field from the top. Well, I could if I had binoculars, but I know it's down there somewhere near the river. With the sea and the sky so close together, and everything in between, what more could one ask for?

The first time I went up the lift this morning, I climbed up a few more steps to the top of the mountain. There I met a ski patrol, who happened to be from Canada too. He had moved from Montréal to New Zealand thirty years ago, and never looked back. But he did wish me a good Canada Day!

We will definitely be back. Ski season runs through October.