I just finished my first full day of work in 17 days. Kiwis sure take their holidays seriously, especially around the new year! We took the opportunity to do some traveling around New Zealand, on both the North and South islands. I'll try to recap the last couple of weeks as best I can recall. Most of the links are to pictures, you can either follow along with the text or find them in my flickr gallery. 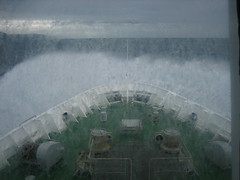 23 december. We packed up our car in the morning and drove to Picton, at the north end of the South Island. From here, we parked the car for a week and boarded the ferry to Wellington as walk-on passengers (bringing a car across the ferry is upwards of $150 one way). The waters were calm between the islands of the Queen Charlotte Sound, but once we entered Cook Strait the ocean swell was 4 metres (picture at right). Many people got quite green and we had to go outside several times to avoid getting too queasy.

24-25 december. We spent a quiet christmas with our friends in Wellington. Amy and I realised that this is the third christmas we have spent together, and each one has been in a different country! (Australia 2004, Canada 2005, New Zealand 2006.)

26 december. We set off to explore Wellington in the dreary weather. On the waterfront we saw the Hikitia, which is a historic floating steam crane capable of lifting 80 tons. We visited Te Papa, which is the excellent free national museum of New Zealand (we definitely didn't have time to see it all). We explored a bit of downtown Wellington, then headed up to the Botanic Gardens where we found a Bush Nugget. 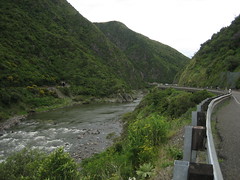 27 december. Our plan for this day was to head up to Lake Taupo via the coast route. However, I think everybody in Wellington had the same idea because as soon as we hit Paraparaumu, the traffic essentially stopped. It took us something like three hours to go 60 km. I was convinced that there was something major like a derailed train or a chemical spill or a fire at a paint factory, but there was nothing. Just traffic. How I wished for the Insight that would cheerfully shut off its engine when stopped! So, we abandoned the Taupo plan (it was not terribly well formed anyway) and headed straight for Hawkes Bay.

28 december. We spent the day around Hastings, picking strawberries, visiting the beach, and going up to the top of Te Mata (the locally highest hill, which is also a historic reserve). 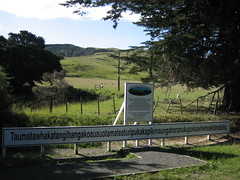 29 december. This morning we went to Napier, which is a few minutes from Hastings. Its claim to fame is the large number of buildings designed in the art deco style. There was a strong earthquake in 1931 which almost completely levelled the town, so all the buildings were rebuilt using the architecture of that era. We did the $4 self-guided walking tour and had pretty much enough art deco about three quarters of the way through. Then we went back to Te Mata and hiked around the reserve a bit, and came across a wedding in progress in a stand of redwoods! We waited a few minutes for the bride to show up but I think they were still shuttling people from another location with a small bus on a dirt road. We bought a new tent and air mattress from Great Outdoors Hastings (a shop recently bought by a former co-worker), which we'll revisit later in the story. Finally, we took a long detour on our way back toward Wellington and saw the place that claims to have the longest name in the world (picture at right). We thought about staying somewhere on the road for the night, but didn't find anything suitable so we just drove straight through back to Wellington.

30 december. Our ferry didn't leave Wellington until 6pm or so (we tried to get an earlier sailing but it was all booked up), so we just hung around for most of the day. We got a bit restless so we went for a short walk up to a reserve above our friends' house, which started out dry but very quickly got very wet! We were drenched by the time we got back but had fun anyway. The ferry ride back was just as rough as the first one, and again lots of people got quite green. We picked up our car just after 9pm and got back home at something like 2am. Whew!

2 january. With cloudy and cool weather in Christchurch, we decided we needed to keep moving. We loaded up the car again with our new tent and mattress and our camping gear, bought two fantastic new sleeping bags at a great discount price, and headed south. We made it to Oamaru, in time to see the blue penguins come home from a day of fishing. Penguins must be one of the world's most cautious creatures. They waddle out of the water and up a slope, and gather in a bunch just before the ridge, taking turns to poke their head slightly further up to see what's up there. Once they're satisfied there are no lurking dangers, they waddle up and over and head off to their nests in the bush. So cute! 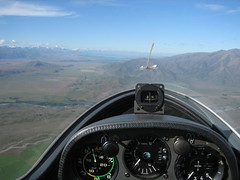 3 january. We left Oamaru and headed straight for Omarama, which is the Mecca of gliding in New Zealand. The Canterbury Gliding Club (of which I'm a member) brings their gliders down to Omarama every year for almost the whole month of january. I was fortunate to find little contention for the gliders (since this was the first nice weather day in a while) and an instructor, so I finally got to do some flying!

4 january. This morning Amy took a ride in a glider (with an instructor, I'm not qualified to take passengers in New Zealand yet) and got a bunch of pictures which she'll be posting soon (nudge!). The weather conditions were far from ideal for gliding, so I didn't fly. 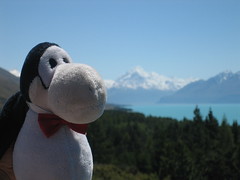 5 january. We awoke to the sound of hot air balloon burners, so we managed to snag a ride in a balloon (tethered). Again the weather conditions weren't great (it was bright and sunny but inversion layers and no wind essentially foiled the good soaring), so we packed up and took off toward Aoraki/Mt. Cook (the tallest mountain in New Zealand). We had brought Opus with us and we promised him we would see both penguins and ice, so we got him in front of Aoraki/Mt. Cook (picture at right). We had lunch at a seriously overpriced cafe in the village of Mt. Cook (it had a good view), went for a short walk, and dangled our feet in ice cold glacier stream water. Then we moved on to Lake Tekapo, where you can find the Church of the Good Shepherd. Not finding a campground that looked attractive there, we finally settled for the night in Fairlie.

6 january. There are noisy campgrounds everywhere. This one had a gaggle of kids playing cricket with a tennis ball, and they even smacked our tent once (and only once). We were awoken by somebody assembling their tent early in the morning without regard for anybody else who might not have wanted to wake up at the crack of dawn. Anyway, we packed up and bailed out of there as soon as we could and headed home.

As I write this now, I realise that we sure did pack a lot of stuff into some of those days! It was great to be able to get out and really see some of the country. I can't wait to explore more.
Subscribe