We have been back from our honeymoon for two weeks now, and I promised I'd write up a trip report! Here it is, with pictures (and links to lots more pictures). 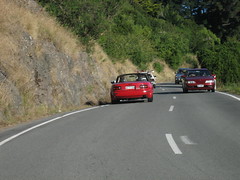 equiraptor were the first to arrive. They had spent the previous night in Tahiti, and were well rested and fully adjusted to the time zone. We met them at the airport and then took them to the car rental place, where they picked up their Mazda Eunos Roadster (also known as a Miata) which would be their transportation for the next two weeks. If you've ever seen the trunk of a Miata, you know they had to be very efficient packers! We drove up the Cashmere hills to the Sign of the Kiwi where we took in the view and had ice cream. Then we continued out along the Crater Rim Road and got some good views of Lyttelton Harbour. 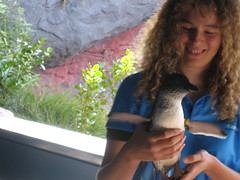 26 March - The rest of the guests arrive. Again the first thing we did was pick up two more rental cars. Then we had burritos at The Burrito Company, which are really good. Some of our guests thought they were even better than Freebirds! The next stop was the Antarctic Centre, which has lots of interesting exhibits and information about Antarctica. The feature attraction is the penguin exhibit, where they keep a couple dozen Blue Penguins who have been injured in some way and cannot survive on their own in the wild. The penguin at right ("Austin") is being held by his keeper, he was on his way downstairs to get some kind of medical treatment.

Up until this evening, our guests did not realise that they were indeed coming to a wedding. It's a long story, but we originally had wedding plans (which our guests knew about), then we postponed them (and we informed our guests), then we rescheduled them (same day, different place, but we didn't tell our overseas guests). At dinner this evening at Dux de Lux, we announced to everybody that we really were getting married, and they were all invited!

27 March - Wedding day! We got married in the garden at Le Bons Bay Backpackers, which is an excellent backpackers hostel near Akaroa on the Banks Peninsula. Our photographer expertly documented our day in pictures. Of particular note are: the weather that day, the bride, the groom, the ceremony, the flowers, the rings, the road, the grass, the beach, the cake, the dance, the dinner, and the evening.

28 March - The next day, we all got up bright and early and suited up in wetsuits to go swim with the dolphins. The Hector's Dolphin is a small dolphin that is native to New Zealand, and is often found around the Akaroa area. Although we motored around in a boat for a couple of hours, we only saw a few dolphins but they didn't want to play. Since the species is endangered there are strict rules about how the tour operators and the public can interact with the dolphins, so we unfortunately didn't get the opportunity to swim with them. We headed back to Akaroa, had lunch, and wandered around the local shops for the rest of the afternoon. The day was still almost completely overcast, so we went back to the hostel and played Scrabble until dinner.

29 March - We started travelling in earnest. We drove all four cars to Mt. Cook, which took something like six hours and we got there just as it was getting dark. We made dinner and had a relaxing evening. 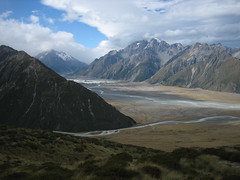 30 March - In the shadow of Aoraki/Mt. Cook, we got up bright and early (to beat the crowds) and hiked up the Hooker Valley to the terminus of the Hooker Glacier. The overcast weather broke up slightly so we could get a glimpse of the lower peak. After returning and having lunch,

dopplertx and I were feeling energetic so we hiked the Red Tarns trail on the other side of the valley. We continued up a bit further and got a fantastic view of the Tasman Valley (right). I saw this same photo on a postcard later that day!

equiraptor left early in the morning to head back north, since they were returning their car in Auckland. Their trip is documented in pictures at the moment.

31 March - It was raining in the morning, so clearly it was time to leave. We hit the road and headed toward Wanaka, stopping briefly in Omarama (the gliding capital of New Zealand!) for lunch. 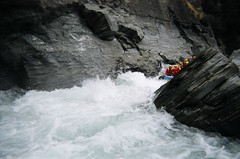 1 April - Rafting! We drove to Queenstown in the morning and checked in for rafting in the afternoon. We chose two different rivers: Amy, Doppler, and I went on the Shotover river, and the others went on the Kawarau river. The road to the Shotover river is the Skippers Canyon Road, one of only two roads in New Zealand where you are not insured if you are driving a rental car (we were on a bus). The narrow one-lane road and the sheer drops at the edge made for a hair-raising ride. The rafting was a blast, though I think we were spoiled when we went rafting in Spain - the Shotover river was almost as good. The other group stopped to see somebody bungee jump over the river right in front of them! That evening we had a decadent dinner at a seafood restaurant. The presentation was fantastic. 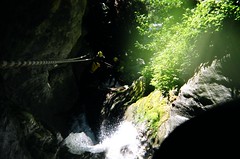 2 April - Canyoning! This was an incredible experience. We suited up with a full wetsuit, helmet, gloves, shoes, and climbing harness with abseiling gear, hiked up to the start of what looked like a small stream, and spent the rest of the day swimming in pools, abseiling down waterfalls, jumping into pools, relaxing in the water, sliding down natural rock slides, learning about the local vegetation and geology, and finally zipping across the stream on a zip line! It was hard work, but canyoning was by far the majority's favourite activity. Amy and I fully expect to do more next time we are in Wanaka. 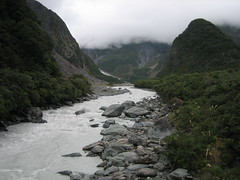 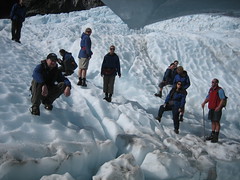 4 April - This was another big day. We all took a helicopter up to Franz Josef Glacier, flew around the mountaintops for a couple of minutes, then landed on the glacier for a two hour ice hike. The ice formations on the glacier seem otherworldly, with tunnels and caves and valleys everywhere. We smuggled Opus (our stuffed penguin) up to the glacier and he had a great time relaxing on the glacier. After the ice hike, we hit the road again and headed north to Hokitika. 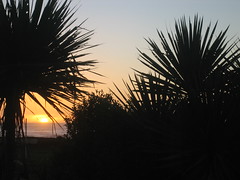 5 April - Hokitika is a great little west coast town, known for its abundance of craft shops selling jade (also known as greenstone or pounamu), woodwork, glasswork, artwork, and a myriad of other things. We browsed the shops for a while before doing some beachcombing - I found a small piece of jade (about 3 cm long) on the beach.

From Hokitika, Amy and I decided to head all the way home to Christchurch for a day by ourselves (it was still our honeymoon, after all!) while the rest of our guests stayed in a cabin at Arthur's Pass. Apparently the cabin was great, it was everybody's second favourite place to stay after Le Bons Bay. 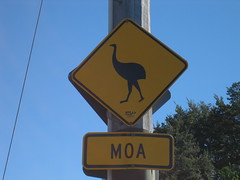 Over the next several days, we still had guests coming and going. Pam (a friend from Austin who is currently working in Sydney, Australia) arrived on Friday and stayed over the Easter weekend to visit and see some of New Zealand. Our Austin guests left on the weekend, and we went with Pam to Willowbank Wildlife Reserve to see lots of native New Zealand flora and fauna including close-up kiwi viewing. We also went back up to Arthur's Pass to show Pam some of the scenery, and had a lovely day doing short hikes in the pass. However, we didn't see any moa (sign at right), most people are sure they've been extinct for a couple hundred years. We also some great art in the sand at the New Brighton pier.

In summary, we had a fantastic two weeks and will remember this trip for a long time to come. Thanks to all who came to share this time with us!